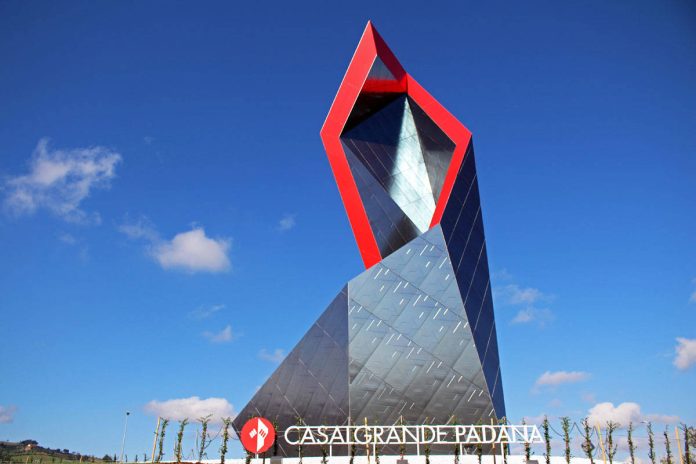 The Crown is a spectacular new landmark that follows on from the famous Casalgrande Ceramic Cloud, the first work created by Japanese master Kengo Kuma in Italy.

Installed near to the Casalgrande Padana production facility on two roundabouts situated on the Pedemontana route linking Casalgrande and Sassuolo, the two installations make up a monumental structure of notable architectural merit and symbolic value, creating a sort of “East Access Door” to the Emilian ceramics district.

Once again, the project was entrusted to one of the star names in the modern architectural panorama: Daniel Libeskind. A well-known figure all around the world, Libeskind has been involved in a fruitful collaboration with Casalgrande for some time now, which sees the two parties working together in a cycle of formal research and technological development that has already produced some fantastic results: from the cladding systems for the CityLife residences in Milan to the Pinnacle installation for Cersaie – Bologna Water Design 2013, the new series of Fractile ceramic tiles and even the spectacular cladding of the Vanke Pavilion at Expo 2015, with further façades for notable buildings in several foreign capitals currently in progress.

Devised as a ventilated façade anchored to an extremely slender, sleek steel structure, The Crown is destined to become a new architectural benchmark in the area around the Casalgrande Padana headquarters.

Architecture in an exhibit: Space&Interiors