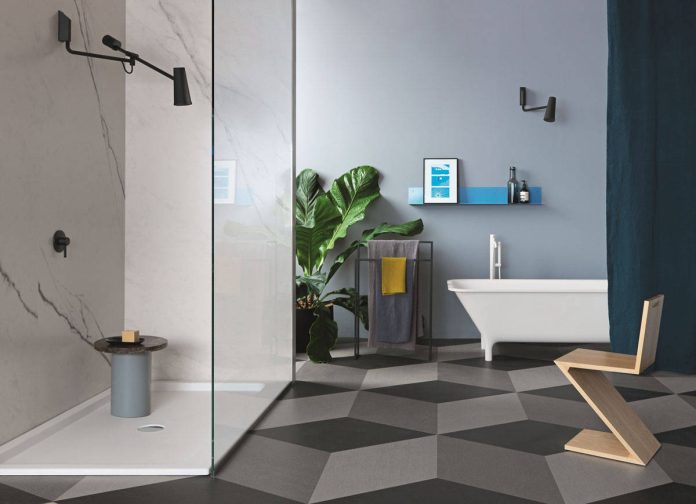 Architect Diego Grandi tells us about the Closer project, a new aesthetic and functional interpretation of the shower column. An innovative solution signed by  Zucchetti.Kos which stands out at Cersaie in Bologna as a leisure time living concept.

At less than one year from its market launch, following the Good Design Award and DesignPlus, Closer has recently added the European Consumers Choice Award 2015 to its achievements. How do you explain this series of accolades?

I was primarily interested in designing a system with the power to reinvent the various gestures associated with showering, by presenting an alternative way of going about a simple everyday ritual.  And I believe that we owe these awards to the fact that the product responds to a functional need, that of making water flow in various directions, with the simple touch of a finger.

This has been made possible by a cantilever system fitted with a counterweight, enabling the showerhead to be stabilized in any position. An unprecedented solution for this type of product.  How was the idea first conceived?

There are already examples of articulated shower systems but these tend to be rather static.  Moreover, the shaft with a mobile showerhead keeps both hands occupied. They have designed some very nice ones but I wanted something different, purely gestural and unrestricted.  I imagined a sort of dance going on in a space that is generally quite static. The idea came to me while I was looking at lighting fixtures with a counterweight.  I have one in my meeting room and, as I looked at it, I don't know why, I imagined a shower. So, I thought I might have been able to give a new function to this object and study a way to make it supply water instead of light.

What particular technical innovations did you have to introduce to transform this intuition into a finished product?
We mainly worked on the joints. In actual fact, despite the fact that the water pressure is lower than it was a few years ago, it is still sufficiently powerful to cause a freely balanced structure to change position. Together with the technical staff of  Zucchetti.Kos we have devised a system to prevent this, whilst retaining the fluidity of its movements.

Closer has an extremely pared down look of geometrical inspiration. What reasons underlie this choice?

I imagined Closer as being a delicately balanced mechanism, a small mobile structure whose position changes constantly and whose shape adapts to people's needs.  I thought this poetic aspect of the project required forms to be pure and not excessively "designed". There was no need for any particular aesthetic artifice.  So, I decided to work on a  truncated cone for the showerhead and on cylindrical volumes for the shaft and counterweight, without adding any decorative element. I chose an absolute black as its colour.  Since this is a "gestural" object in which physical contact and handling are of primary importance, I decided to give the surface a "tactile" finish, one that is slightly rubberized with a comfortable hand-feel, making contacts with Closer particularly "warm" and pleasing.

Closer is one of the outstanding objects of the Day-Off installation at Cersaie in Bologna. What is it about exactly?

Day-Off is an installation of 250 sq m whose design reflects the concept of a weekend "getaway". For this project, I was inspired by the culture bequeathed to us by Le Corbusier and the Bauhaus movement which, at Cape Martin and Cape Cod, interpreted the idea of getting close to nature again, without having to give up the beauty and efficiency of design.

Naturally, I have no intention of comparing myself to these great masters of design but I was interested in reiterating their approach through a concept that sums up what I would do if I had to design my own home for short holidays. Owing to its simplicity, I believe Closer lends itself to dialoguing with some historical pieces I have picked out to furnish this space, such as the LC armchair by Le Corbusier and the Tokyo Chaise Longue by Charlotte Perriand by which, incidentally, it is inspired.

Lema, balanced between tradition and revolution