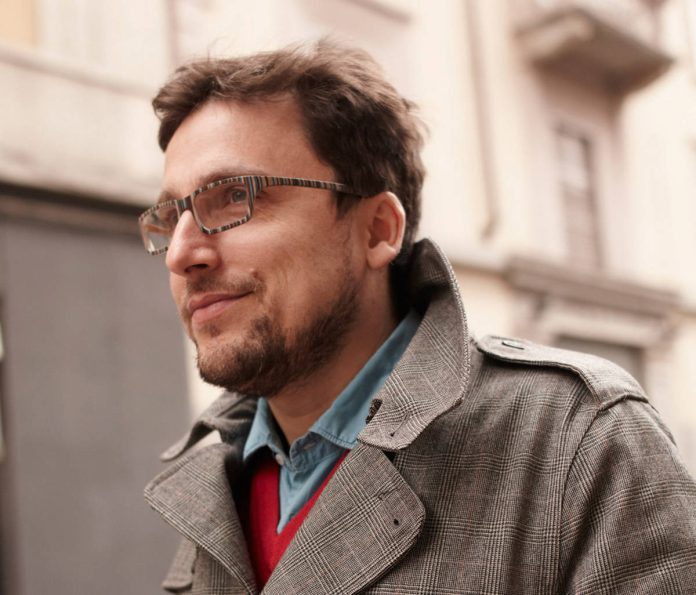 One of the younger generation’s most acclaimed designers, Matteo Ragni describes his latest office furnishing project. Designed for Fantoni, Hub is a system conceived to provide a response to new workspace requirements.

During Workplace 3.0/Salone Ufficio 2015, Hub by Fantoni aroused a good deal of interest. How was this project first conceived?

I got the inspiration for Hub from Bruno Munari’s Abitacolo, a kids’ combi-bed he designed in the 70’s to provide a solution to each phase of an adolescent’s day: sleep, play, study and socialization.  This intuition intersected a need I had been aware of for some time, that of designing a four poster table, and it has guided me in the design of this operational desk system for offices.

What is the most innovative element of this project?

When working on the project, I mainly reflected on the way in which work is organized in modern offices, that is to say, no longer based on the call centre model in which individuals are isolated from their colleagues. Today, there is a need for an open environment which facilitates sharing and the exchange of ideas between the various members of a team, while also providing space for reflection and individual work.  With these requirements in mind, we have designed a square table with four workstations which, if necessary, may be transformed into a conference table, without fixed partitions and fitted with numerous accessories.

The design of Hub is characterized by a canopy. Does this element have a mere aesthetic value or does it respond to particular functional needs?

As well as integrating the lighting system and worktop, the canopy creates a “cocoon” effect which is conducive to concentration, even in a large open plan office.  Basically, people feel protected in their working environment, even in a context that is designed to encouraged interrelations with colleagues.

In fact, we have contemplated mobile screens which, when individual tasks are being carried out, may be erected to create isolated spaces.  Conversely, when the staff are engaged in a phase of the work entailing greater communication and sharing, the partitions may be removed.

Moreover, the integrated lighting guarantees a significant saving in energy costs since it is focused exclusively on those areas actually operating. This allows for a reduced use of costly ceiling-hung lighting systems, which light up the entire office space, even where it is not necessary.  The effect – both poetic and functional – is similar to that of a myriad of tiny lanterns suspended mid air.

For the worktops, we have chosen natural materials and decorative motifs such as tweed, without  failing to present more radical solutions such as ISB, a large particle recycled industrial chipboard normally used for making packing cases. We have chosen to upgrade it and use it for worktops which confers a pronounced textural aspect. I like this uneven surface a great deal.  Desktops are usually white and somewhat standardized and anonymous.  Ours, however, are tops whose technical characteristics fully comply with regulatory norms but are nevertheless endowed with a unique and unrepeatable texture.

Hub has been chosen by Michele De Lucchi to furnish one of the four areas of the Passeggiata, the installation presented at Workplace 3.0 during the latest edition of the Salone del Mobile.

De Lucchi did not wish to show an article already in production. For this reason, he asked me to think in terms of a limited edition project.  So we have realized several free interpretations, such as ‘Tra le nuvole’ (In the clouds), a four metre-high Hub, or ‘Il Confessionale’ (The Confessional) with two workstations facing each other and two benches.  ‘Il campanile’ (The Bell Tower), however, with a sort of tower at the centre of the table, conceptually evokes the idea of a town square. We only had two prototypes made for the exhibition, which gave us the chance to verify further opportunities for evolving the system. ‘Il Confessionale’, for instance, is still in the development phase and will soon go into production.

The new ways of sociality

FederlegnoArredo: ideas and actions for sustainability