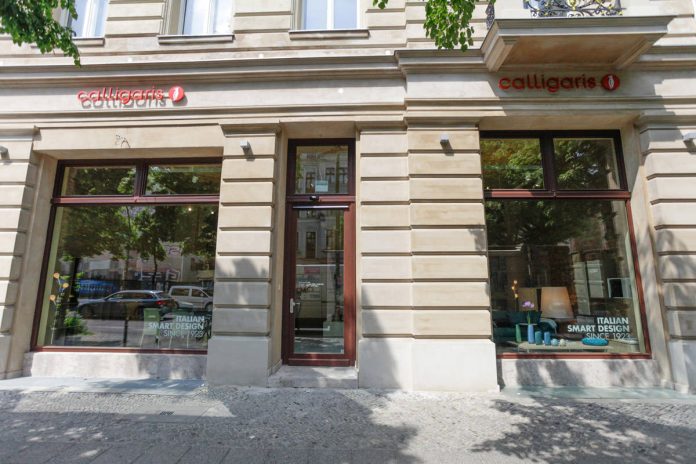 Following its strategy of international expansion, after the opening of Milan, Paris and London, Calligaris has recently inaugurated its fourth flagshipstore in Berlin Mitte, in one of the neighbourhood’s most beautiful late-19th-century buildings, at 231 of Torstrasse.

This store occupies a total surface of over 300 square metres, on two levels. The walls are a mixture of masonry and bare bricks. Restoration/conservation work was carried out to bring the original ceiling frescos back to light and on the gilded stuccoing and animal statues. The original lighting, with crystal chandeliers, was also preserved.

The interior is flooded with light through the large windows on more than one side and features a technical-lighting concept designed to highlight the products on show. Like the Düsseldorf shop, which opened in October 2014, the Berlin flagship store is fitted out according to the new Calligaris Retail Concept: a display format devised to give prominence to the key elements of smart design and to create attractive mini residential settings focused around the product, thus making a flowing, dynamic space of high visual impact, ideally representative of the Calligaris brand.

The latest Calligaris smart design products – such as Claire chairs, Omnia table, Urban sofa and Lazy armchair – are prominently displayed both in room settings and on platforms so as to highlight the characteristics and details that their designers envisaged for them.

This new opening is part of the Group’s international expansion plan, which includes the opening of Calligaris stores in the centre of Los Angeles and in strategic locations, such as Baku, Beijing, Santo Domingo and San José in Costa Rica, and applying the new retail concept in refurbishing the brand’s own shops and its spaces in multi-brand stores.

Through the history of B&B Italia

Laufen and Wanders, still together