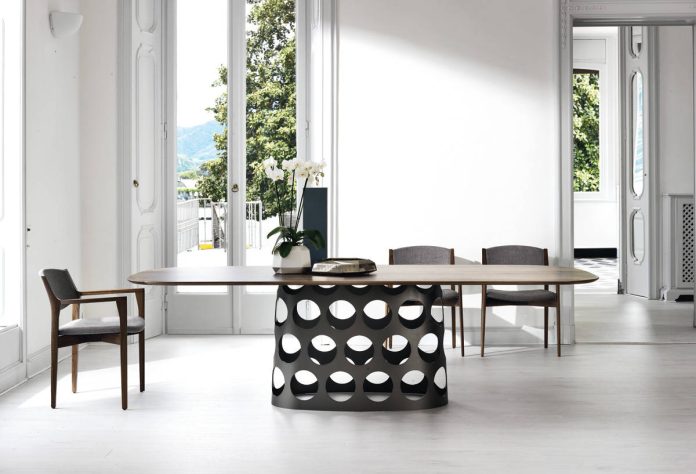 There is a bond between a company and its designer, a bond rooted in a common sensitivity, a common design approach. When such a relationship grows in-house, through a natural, spontaneous process of development, design and production attain unparalleled synergetic effects.

This is what happened to Porada and its designer Carlo Ballabio, who joined the company’s R&D division in 2011. This fruitful collaboration began with a writing desk, Saffo, a product born almost by chance, styled by Ballabio by giving free rein to his creativity. Having internalised the company’s distinctive traits, the designer embodied them in a product that appears light notwithstanding the solid quality of the black walnut, which, in keeping with Porada’s identity, gets pride of place in this creation as a dominant design theme.

One, two, three pieces of furniture: in this manner the company became aware of the potential of its collaborator, who was soon recruited to design ever-new collections – such as the ones on display at the Salone del Mobile – to flank the creations by better know company designers, such as long-term collaborators Colzani and Marconato-Zappa, or young Dolcini and Gallina. Thus, Ballabio joined the team of Casa Porada designers. «The company allowed me to design new products from the very start, and I was granted access to direct contacts with internal and external production systems. To manage an idea from the origin to the production stage is a fascinating task – points out Ballabio – Indubitably, there is an affinity that ties me to the brand, such as a desire to experiment and explore new roads in interior design without overlooking the know-how acquired by the company over the years».

A rigorous style goes hand in hand with attention to detail: this is the recurring design theme that may be discerned in the designer’s creations, and in particular in the Ziggy collections and the Atlante range of sideboards, enriched this year with new elements: Atlante 4, Atlante tv, Ziggy 9 and 10, Ziggy Table and Bed, and bench set Webby. «The common feature that has led to the development of these products is the unique design of the leg made from solid black walnut, conceived as a connecting element and derived from the first piece I designed for Porada, the Saffo writing desk. This is the recurring theme that has given life to the entire collection of furnishings for the living and sleeping areas». Among the new creations we should mention the Rogers family of small tables and the Conny and Andy seat line-up, as well as three new light fixtures, two of them designed by Salvadè. A passion for design, a close relationship with the company, its tradition, and its manufacturing skills: this is the trait d’union between Porada and its designers team; a combination that gives life to products of iconic elegance, whose value is enhanced by an artful use of wood.

Watch also the video of the interview with Mauro Nastri.

The rhythm of space

Workplace3.0. The workplace becomes an incitement for creativity